#Frasercares - covid - 19
Your session has time out. You have been logged out due to inactivity. To continue, please sign in again.
member sign up | sign in
| LOGOUT
Now Reading:
Four Upcoming AFL Matches That You Can't Miss At The Melbourne Cricket Ground 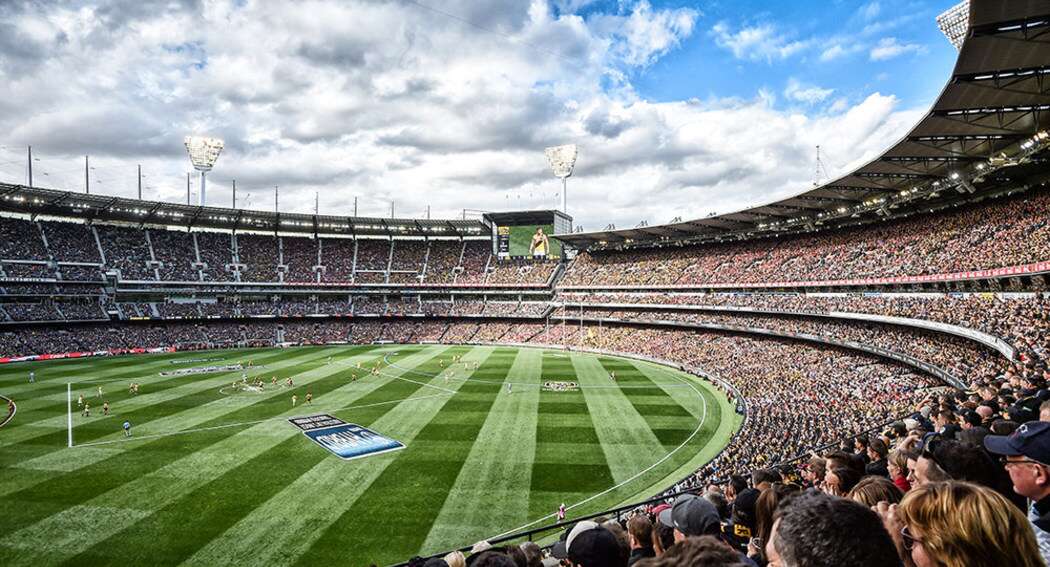 It might be called the Melbourne Cricket Ground, but come wintertime the 'MCG' is the home of Australian Rules Football. Undoubtedly one of Melbourne's greatest icons, many of Australia's most famous sporting moments have taken place inside this massive cauldron.

From the 1956 Summer Olympics and Ashes cricket to the myriad of AFL Grand Finals, when the MCG comes alive with over 100,000 spectators, there are few places on earth that get this electrifying. And before the season is decided on September 28, you'll be happy to know that there's still a plethora of exciting AFL matches to be held at the MCG. Join in all the fervour as Melbourne's sporting mad community comes together to cheers on their team.

Staying at Fraser Suites Melbourne has you in close proximity to the MCG, as your luxury apartment makes for the perfect base to catch the AFL. There's no better place to experience the drama of AFL, so pay a visit to the MCG for these upcoming matches, as it's sure to be in full swing.

Collingwood and Melbourne are two giants of the AFL, but the two clubs couldn't be placed more differently as the season reaches its half-way point. As the runner-up for the 2018 season, Collingwood is once again in contention for the top of the ladder, while Melbourne is once more finding itself languishing towards the bottom.

Despite this, you can never rule out an upset with this match-up considered one of the fiercest in the entire competition. However, for their upcoming clash, Collingwood will come into the game as runaway favourites as the Demons continue to struggle to find form. Yet, after a recent 2-point loss to Adelaide in Round 11, perhaps things are finally beginning to look up for Melbourne.

The stage is set for this to be a thrilling match, with the intense rivalry between Melbourne and Collingwood dating back decades. You can head as far back as 1958 to grasp the passion in this contest when Collingwood stopped Melbourne from winning their fourth consecutive premiership. But the Demons have held their own over the Magpies throughout AFL history, with half of their 12 Grand Final wins coming against Collingwood – a fact that neither set of fans has forgotten.

With the Fremantle Dockers still in the running to make the finals, getting a win over lowly Melbourne is vital to ensure that they finish in the top-eight come September. While many didn't believe the Dockers would be in this kind of position at the start of the season, the plucky squad has proved the doubters wrong as several of their leading players have performed wonders throughout the year. However, the year hasn't been entirely smooth sailing, with the Round 2 loss to the Gold Coast Suns a considerable road bump in an otherwise great run of matches.

Meanwhile, the same positivity can’t be said of Melbourne, despite the fact that some believed that the 2019 season would finally be the point where the club pushed up the ladder. However, it hasn't eventuated and there are likely not going to be too many highlights for Demons fans to get excited about throughout the rest of the season.

In the headline Saturday match, the West Coast Eagles are making the long journey east to try and outmatch the Hawthorn Football Club. As last year's premiership winners, like Collingwood, the West Coast Eagles again find themselves within touching distance of the top of the ladder and are bound to go into the 2019 final series as one of the favourites again.

Over the years, Hawthorn has been one of the AFL's most successful clubs, having won 13 premierships, including a run of three-in-a-row from 2013 to 2015. However, this year they find themselves outside the top-eight, although the Hawks still have a chance to squeak into the finals. But with Tom Mitchell, the 2018 Brownlow Medallist, breaking his leg before the 2019 season even got underway, it's been an inconsistent year so far as injuries and the club's youngsters have struggled to gain valuable wins so far.

However, with coach Alastair Clarkson at the helm, often considered the greatest coach in the AFL's modern era, getting a win over the West Coast Eagles could inspire them to greater things for what's left of the season. The match is shaping up to be one of the round's best, so secure a seat at the MCG to witness the action unfold in-person.

One of Australia's premier sporting affairs is a crunching Friday night game of footy at the MCG. As the stadium and surrounding areas bustle with activity under lights, this clash features two of the largest supported clubs in the competition duking it out.

This Round 16 match is set to be imperative for both clubs, but for two very different reasons. While Collingwood could cement their position in the all-important top-four, Hawthorn could still be vying for the chance to play finals football. The atmosphere will be deafening as the two passionate fan bases are sure to have the stadium at close to capacity as they try to inspire their team to victory.

Collingwood's star-studded forward line is almost certain to give the Hawthorn defence a tough night out, but with the Hawks young-guns like Jaeger O'Meara and rising star James Worpel in midfield, an upset could be on the cards as the two Melbourne football titans fight for bragging rights.

Getting to the Melbourne Cricket Ground from Fraser Suites Melbourne

The Melbourne Cricket Ground is located in the heart of the city's sporting district with a variety of pubs and restaurants all within touching distance. Immerse yourself within Melbourne's great sporting culture as your Fraser Suites Melbourne luxury apartment is situated only a seven-minute drive or taxi ride away. Head along Exhibition Street and onto Batman Avenue – in the distance, you'll see the MCG towering above its surroundings as you pass by other sporting landmarks, including Rod Laver Arena and AAMI Park. Alternatively, head out for lunch or dinner at the seemingly endless number of eateries near your accommodation before making the easy-going 30-minute walk to the stadium. There are also plenty of public transport options that make the journey a breeze.

The MCG is one of the world's greatest sporting venues, and Australian Rules Football is its undeniable top attraction. Experience all its glory by heading along to an action-packed game – find out more information and book your tickets at the MCG website.