11 awesome things to do on your visit to Brisbane

Australian coffee culture is beloved all over the world, with Melbourne-inspired cafes popping up everywhere from Singapore to London. It’s therefore no surprise that many contemporary coffee trends originate in Down Under. Whether you’re feeling adventurous or just need a regular caffeine kick, you’re bound to find the perfect cup of joe at one of the country’s many excellent coffee shops. If you’ve seen baristas working behind a set of beer taps, they’re likely preparing cold brews and nitro coffees, which are fast becoming the caffeine lover’s chilled drink of choice. And for good reason too: Cold brews are made by steeping coffee slowly in iced water, resulting in a full-bodied beverage that’s not diluted by melting ice. Meanwhile, nitro coffee is touted as a healthier alternative – the added sweetness comes not from sugar but from the infusion of nitrogen. Plus, it’s gentler on the stomach, with lower acidity levels than a regular hot black.

Where to try this coffee trend in Australia: Way ahead of the game, Veneziano Coffee Roasters first launched its nitro coffee in 2014 to great fanfare. If you must have your coffee on the go, check out Byron Beverage Co.’s Black Nitro, an organic cold brew in a can. 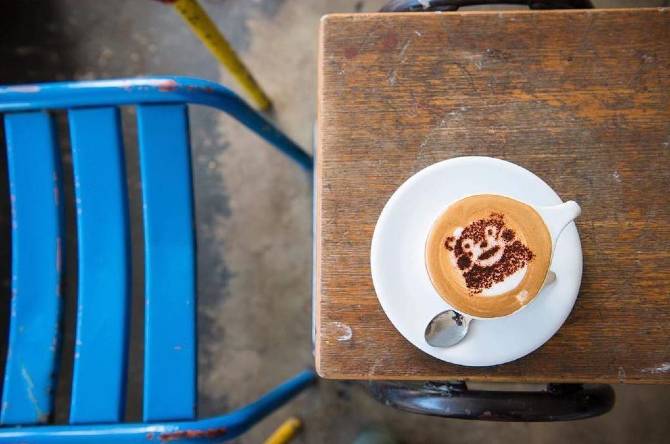 You’ve probably seen numerous variations of latte art gracing your Instagram feed. In its most basic form, latte art has been around since the 1980s, when baristas first discovered they could create a simple heart pattern by contrasting espresso crema with milk foam. These days, it’s being taken to a whole new level. Riding a wave of social media momentum, baristas have gone beyond basic heart shapes to complex drawings and 3D figures – some are even using food dyes to make multi-coloured cups of java.
Before you shrug this off as a fad, you’ll be surprised to discover that latte art is taken very seriously by the coffee community. In fact, the best baristas in the world even gather at the annual World Latte Art Championships to flaunt their skills.

Where to try this coffee trend in Australia: To see some spectacular latte art, make your way to Pathfinder xnobu in Melbourne, where you can catch two-time champion Nobumasa Shimoyama in action. If rainbow lattes are your cup of… coffee, Too Many Chiefs is the place to be. Besides its food-dyed coffee, the cafe also specialises in healthy drinks such as turmeric lattes. And for amazing 3D latte art in a beachfront setting, check out Sea Change Café in Dee Why, northern Sydney.

If fancy coffees are simply too much to stomach, don’t fret. Many coffee shops in Australia take pride in roasting their own beans and creating their own blends for the perfect cup of joe. Black, white, filtered – you’ll be spoilt for choice.

Where to try this coffee trend in Australia: Brewing since 2003, Single O has successfully grown from a standalone shop in Surry Hills to a second outpost in the Sydney CBD, as well as a roasting site and training facility in Brisbane. Then there’s also Coffee Alchemy, a 15-minute drive from central Sydney. Don’t be fooled by its simple brick exterior – many have raved about its expertly roasted coffee. 17 Unique Adventures Only Locals Know About in Melbourne