At Frasers Hospitality, we promise you the best deals at our properties when you book directly with us on our website. Our Best Rate Guarantee ensures that you will not find a lower rate on other websites or anywhere else.

HAVE A PROMO CODE?

At Frasers Hospitality, we promise you the best deals at our properties when you book directly with us on our website. Our Best Rate Guarantee ensures that you will not find a lower rate on other websites or anywhere else.

Witness spectacular ocean views from Fraser Suites Dalian hotel, your home away from home in this charming north-eastern Chinese city.

With its tree-lined streets, temperate climate, clean air and beautiful beaches, even the most jaded travellers will want to spend a few days or more in this eminently liveable city. With its premium address in the new Donggang CBD, the 259-unit luxury Dalian hotel is part of the Europark Tower mixed-use development, comprising designer offices and a 100,000 sqm shopping mall.

Donggang is an up-and-coming business lifestyle district with plenty of attractions and restaurants right at the doorstep of our elegantly furnished Dalian apartments.

With convenient transport connections,  exploring the city  is easy and efficient. The property is only 30 minutes by taxi from the airport, 15 minutes by car to the train station, and a few minutes’ walk to the metro.

Among other things, the port city of Dalian is delightful for both its history and architecture. It was once ruled by the Russian and Japanese, in that order, before being transformed into today’s financial, shipping and logistics centre for East Asia.

The aesthetically pleasing Zhongshan Square, for instance, was originally Nicholas Square, named after the Russian Czar, and is Dalian’s oldest square. Russian Street is a 430-metre-long street that was restored to celebrate Dalian’s colonial past. It is also where the former Dalny City Hall, a yellow-brick building with a green roof, is located.

Fraser Suites Dalian hotel features a range of accommodation from Studios to Three Bedroom apartments, with each fully furnished residence boasting a well-appointed kitchen and comprehensive home entertainment system. Enjoy delicious sushi at our inhouse Japanese restaurant or explore the city’s famous seafood restaurants. People-watch at one of the many trendy bars or wind down in the privacy of your own living room as you watch the sunset over the majestic ocean. 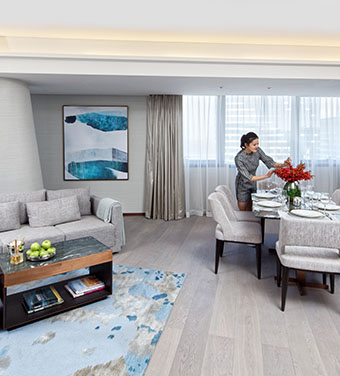 what residents say about us

Spacious accommodation perfect for a family

My family and I recently stayed in a 2 bedroom apartment at the Fraser Suites Dalian. The apartment was quite spacious and well-appointed. We appreciated the staffs' exceptional service and friendly attitudes. My children enjoyed the swimming pool and the location enabled us to easily get anywhere we wanted. We plan to return in the future for another visit. 2 nights just wasn't enough!

We stayed here during Chinese New Year. Although we only had a short stay, we had a wonderful time at Fraser Suites. The rooms were spacious and very clean. All electronics such as the TV, washing machine, etc. were all very legit. The breakfast buffet had a great combination of Chinese and Western cuisine. This place is perfect for people who would like to stay in Dalian for a longer period of time, as it has all the facilities you may need, great location and wonderful staff.

What are the recommended Dalian China tourist attractions?

Dalian is one of the most beautiful seaside cities in China where visitors can swim, sunbathe, engage in water sports or soak up panoramic views of the harbour.

Stroll down the tree-lined thoroughfares, admire the lush lawns of the city’s many squares and pop into one of the many bars and restaurants. These are all perfect places for people-watching while enjoying an aperitif or savouring the fresh seafood for which Dalian is famous.

What is the reception’s opening hours?

Is there an airport shuttle service?

​We do not have an airport shuttle service, however, the concierge can arrange a limousine or taxi service for a fee.

What are the check in and check out times?

The check-in time is from 2pm, and the check-out time is 12 noon.